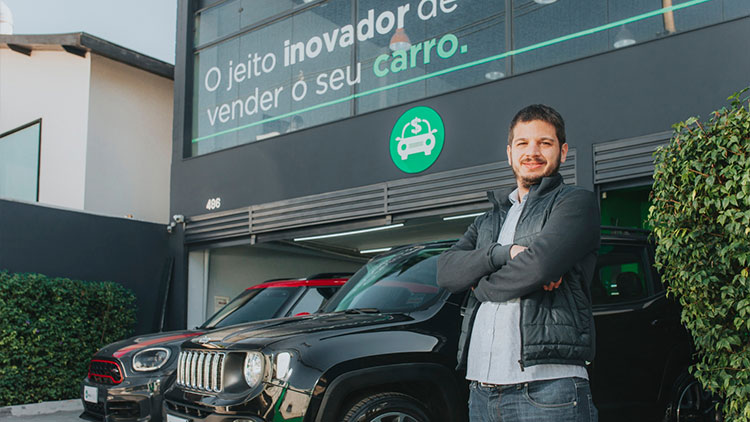 InstaCarro, a digital marketplace that connects used car sellers to dealers in Brazil, has raised $23 million in a Series B round of funding.

Notably, U.S.-based firms co-led the investment, including J Ventures, FJ Labs and Rise Capital. Spain’s All Iron Ventures and Big Sur also participated in the financing, among others. With the latest round, São Paulo-based InstaCarro has now raised more than $56 million since its 2015 inception.

As we all know, the COVID-19 pandemic led to an increase in people all over the world buying and selling things online, with cars being no exception. InstaCarro plans to use its new capital in part to capitalize on the shift and “aggressively” expand its reach within Brazil.

Until this year, the startup operated only in São Paulo. In the first half of this year, it launched operations in eight new cities, and is now also live in Campinas, Curitiba, Joinville, Santos, Brasília, Goiânia, Rio de Janeiro and Belo Horizonte.

For context, the startup compares itself to Carvana in the U.S., Chehaoduo in India and Carro in Indonesia.

CEO Luca Cafici started InstaCarro after having co-founded a car classified startup in Asia with Rocket Internet. That experience, according to Cafici, taught him that “car classifieds were not solving the problems people had when selling their own cars.”

Inspired by the early success of Auto1 in Europe, he decided to return to Latin America to build a similar model, with an exclusive initial focus on Brazil because it is the third largest car market in the world.

Today, InstaCarro is one of the largest used car buyers in Brazil, according to Cafici. Since its inception, the company has transacted more than R$1 billion, or US$193.2 million, working with over 35,000 people seeking to sell their cars to dealers. The startup has been growing 21% month over month since the start of COVID, and has been profitable since 2019. Profitability is up by nearly 10x compared to pre-pandemic levels, Cafici said.

Looking ahead, InstaCarro aims to become a “full-service” car trading platform after hearing from customers that they would be interested in buying a car directly through its platform as well.

Under its current model, the process seems straightforward. When a customer sells their car through InstaCarro, the company comes out to their home to inspect the car, taking more than 150 pictures, and then auctions the car through its network of over 4,000 dealers across Brazil. Customers receive a bid for their car in 24 hours, and InstaCarro pays out the customer the same day and handles all of the paperwork, according to Cafici.

“The auction is a key component to achieve a great price, as there is no agreement on what the true value of a used car is,” he added. “The more dealers you talk with, the higher price you get.”

The startup also plans to use its new capital to “improve the coverage” of its home inspection model and improve the efficiency of its digital auction process, Cafici said. It, naturally, intends to also do some hiring. InstaCarro has 120 employees, and it plans to double that number by 2022.

Prior to the pandemic, the company had partnered with major supermarket chains to create inspection points. But with the onset of the pandemic, it began inspecting cars at the sellers’ homes, which has proven to help the company move and grow faster, Cafici said.

“The pandemic forced us to reinvent our business model. Before the lockdowns, most of our operations depended on central inspection sites, which we had to shut down overnight in March 2020,” he told TechCrunch. “For our customers, our dealers, and our team, last year was challenging and scary. Our team worked hard to reinvent our business model around home inspections, so that we could continue doing business in a safe way. We started going to our client’s driveway instead of having them come to an inspection site.”

Today, over 90% of the company’s customers choose to do everything online.

John Nordin of J Ventures said his firm was impressed by the way the company shifted its business model after COVID hit and is “now growing faster than ever.”

“We see digital car dealerships finding success in markets across the world, from the U.S. to the U.K., Indonesia and Mexico,” Nordin said. “The team or teams that build a digital car dealership in Brazil have a lot of work cut out for them, not only to figure out how to fit the model to Brazilian consumers, but also to handle the operational challenges of buying and selling a huge volume of cars every day. InstaCarro has the right team to tackle the challenges ahead.”

Sorry, the comment form is closed at this time.